The first German house of literature was founded in Berlin in 1986, followed in quick succession by further houses in the bigger cities of Germany, Austria and Switzerland. They quickly evolved into meeting-places for literature and the contemporary book and soon became irreplaceable venues. 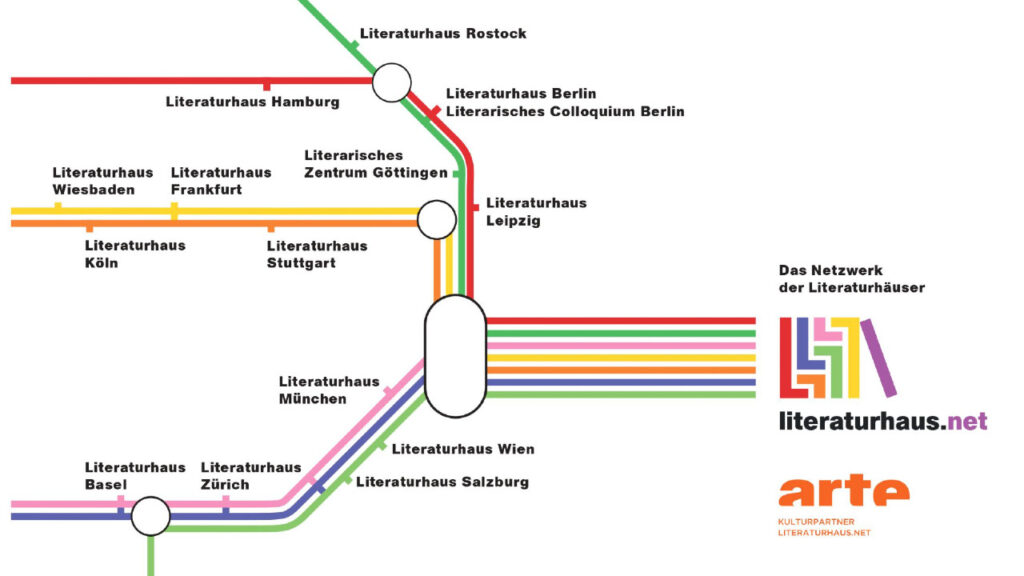 At the end of the nineties the German-speaking houses of literature began working together on a variety of projects like exhibitions, reading tours and poster campaigns. Since 2002 they have been formally associated, initially more loosely, and since 2008 as a registered non-profit organization under the name “literaturhaus.net”. Its members exchange ideas, contacts and experiences and aim to work as brokers of literature by jointly applying for funds and developing projects. It is our aim to  promote the brand “house of literature” as synonymous with a contemporary and versatile promotion of German and international literature.

Only houses of literature that satisfy the requirements of our statutes can become members. We meet regularly and discuss and decide upon joint projects. The board and the managing director handle daily business and put plans into action. The network of houses of literature has developed and become renowned for formats like “Poetry into the city”, ”Fragile. European correspondences” as well as the “Prize of the houses of literature” for writers who have achieved exceptional distinction in promoting live literature.

To date, the network of houses of literature has been supported in its work by the Goethe Institut, various foundations like the Kulturstiftung des Bundes (state art foundation), Robert Bosch Stiftung, S. Fischer Stiftung and a number of sponsors. The German-French television channel ARTE is our media partner.

The houses of literature are signature institutions providing literary events and networks around all issues in connected to literature. Writers, journalists, publishers, translators, editors, booksellers and the interested public meet for an open and unrestricted discourse. The houses of literature work as a catalyst. A multitude of influences from the urban surroundings are reflected in their programme. Houses of literature reflect on current topics and in turn initiate cultural debate among the public.

In most houses there is a restaurant or café serving as a space for informal gatherings and exchange. In many cases the venue can also be used for exhibitions, for theatrical and music performances or even to screen films.
The houses of literature offer their audiences a wide and ever-changing range of events, be it a reading from an unpublished manuscript, a talk with a best-selling author, or a discussion of a controversial political or cultural topic or even of the representation of a historical period.
Houses of literature are not bound by mainstream culture or any particular aesthetic direction. Even remote subject matter and hitherto unknown literatures will find their place in the programme of houses that aim to be a platform for open-minded and critical discussions of literature and the associated arts.

Please do not hesitate to contact us if you would like to learn more about our work and current projects.